Gene therapy treatments are based on the delivery of therapeutic genes into target cells using small icosahedral capsids called viral vectors (1). Those vectors are either administered directly to patients (in vivo gene therapy) or used to modify patient or donor cells in culture before transplanting them into patients (ex vivo gene therapy). The most commonly used viral vectors in clinical trials are lentiviral vectors (LVs) and recombinant adeno-associated viral vectors (AAVs). Both are used to treat inherited blood disorders with AAVs also used as effective delivery systems for neurological and eye diseases (2). Such novel gene therapy treatments, while holding exciting promises, also face great translational hurdles. In particular, the manufacturing of large quantities of viral vectors (shown in Figure 1) to treat sufficient numbers of patients remains a challenge. Viral vector manufacturing is typically performed using mammalian cells lines as production factories and requires a transfection step, whereby viral vector components are introduced intoproducer cells as plasmid DNA. High efficiency of plasmid DNA delivery into cells is essential and usually done via transient transfection since it is by far the simplest and fastest approach to obtain high viral vector yields. This transient transfection step requires careful optimisation, as the viral vector components have been split to be expressed on separate plasmids (usually three plasmids) to improve the safety profile of gene therapy vectors. The three plasmids to be co-transfected into mammalian cell lines for the production of AAV vectors are:

the plasmid which contains genes encoding the structural capsid proteins and other auxiliary gene,

the adenovirus-derived helper plasmid, which contains essential genes such as E2 and E4.

All three elements carried by plasmids are needed for viral vectors to assemble, thus all three plasmids need to be efficiently co-transfected into as many cells as possible for optimal results. This is why transfection really matters.

Addressing the transfection challenge for upscale of AAV vector production

Conventional methods for AAV vector production use adherent cell culture systems which are heavily dependent on the presence of serum in the culture media (3). These methods are still widely used in R&D but lack the scalability and reproducibility required when moving towards the clinic. Thus, there has been a shift in AAV manufacturing methods driven by the need to develop flexible, robust and scalable methods (4). For example, the wider use of chemically defined cell culture media has significantly improved reproducibility. Another significant improvement has been the adoption of suspension cell culture systems for viral vector production following their successful use for protein and antibody manufacturing. The combination of suspension cell cultures with chemically defined culture media have notably reduced the batch-to-batch variability and simplified harvesting and downstream purification of AAV viral vectors. However, cells in suspension or adapted to suspension culture remain more challenging to transfect compared to adherent cells. Therefore, it is crucial to master and optimise the transfection step during viral vector production (Figure (1) in order to increase yield. In contrast to improvements in downstream processing, improvements in upstream processing, such as transfection can boost viral titres, having a significant positive impact on the overall viral vector production process

(3).At large scale, any process that involves mixing, handling and transfer of large volumes into bioreactors is likely to impact on the production yield. Transfection is no exception, particularly for suspension cultures, where changes in mechanical and physical parameters within the bioreactor through the addition of large volumes of transfection mix disturbs cell metabolism and growth

(4). The volume and time constraints associated with the handling of larger transfection reagent volumes also affect overall viral vector yields. As a result, there is a real demand for transfection reagents that can support large scale manufacturing of AAV vectors for gene therapy applications and offer the following: (i) increased viral vector yields, (ii) improved large scale production methods in bioreactors, (iii) maintained flexibility and reproducibility, and (iv) compliance with quality and regulatory requirements for GMP manufacturing and commercialisation. Polyplus-transfection’s latest innovation in transfection addresses many of these requirements with FectoVIR®-AAV.

FectoVIR®-AAV is a novel first-in-class transfection reagent designed for large scale transient transfection of AAV vectors in suspension cells, and as such, it overcomes scalability, productivity and flexibility issues while maintaining high efficiency.

One of the main advantages of this new reagent is its compatibility with chemically defined (CD) cell culture media used for suspension cell culture. When transfection is performed in the most commonly used media Opti-MEM, Freestyle™ F17 or BalanCD® HEK-293, the viral vectors titres obtained are comparable to those obtained using cells grown in standard tissue culture media (e.g. DMEM) (Figure 2). These results demonstrate high reproducibility and greatly facilitates process development for the industrial scale-up.

The formulation of FectoVIR®-AAV has been also optimized to allow the reduction of the transfection mix volumes without decreasing AAV viral vector titres. Why is this so important? Usually the preparation of the transfection mix requires the transfection reagent and the DNA to be mixed with media or buffer and incubated for a minimum of 15 minutes to form the appropriate size complexes prior to their addition to the cells. Most protocols suggest using a transfection mix volume of 10% (v/v) of the total culture media to avoid toxicity issues. At large scale however, in a suspension bioreactor, the addition of 10% transfection mix sometimes perturbs cell growth. In addition, the manual handling of large volumes is cumbersome and error prone (e.g. addition of 20 L of transfection mix to 200L of cell culture). With FectoVIR®-AAV, the transfection mix (or complexation volume) can be reduced to 1% (v/v) of the cell culture volume without impacting cell viability or final AAV yield (as shown in the Figure 3). For example, in a 200L bioreactor, only 2L transfection mix will be needed instead of 20L. Such a 10-fold volume reduction is likely to decrease handling mistakes thereby improving the overall process productivity and batch-to-batch reproducibility.

Finally, FectoVIR®-AAV allows the formation of stable transfection reagent/DNA complexes over time. For most transfection reagents, the incubation time is a limiting parameter as the complexes continue to grow over time forming larger aggregates. As a result, extended incubation times decrease cell uptake and lead to a lower transfection efficiency. For large scale processes, time is of essence as for example 20 L of transfection mix cannot be added at once into the bioreactor. With FectoVIR®-AAV, transfection mixes are stable for up to 6 hours (Figure 4), thus time constraints are therefore no longer limiting when preparing large scale transfections. This in turn impacts yield positively by reducing the risk of compromising final AAV vector titres. Taken together, the characteristics of FectoVIR®-AAV demonstrate that this new transfection reagent has the potential to significantly alleviate handling and time constraints imposed by process development and large-scale manufacturing of AAV viral vectors for gene therapy while allowing production of high titres viral vectors.

From a technical perspective, large scale manufacturing of AAV vectors is greatly facilitated with FectoVIR®-AAV transfection reagent. However, new transfection reagents also need to fulfil regulatory requirements as growing manufacturing capacity demands that all materials used in the production of AAV gene therapy vectors meet stringent quality and traceability requirements. Polyplus-transfection is a pioneer in the manufacturing of GMP reagents, as they launched the first GMP-grade transfection reagent for gene therapy in 2018, namely PEIpro®-GMP. This reagent is already widely used for preclincial and clinical applications (5-9). FectoVIR®-AAV will follow suit and be available as GMP grade in 2021. This new reagent not only offers technical improvements for handling large scale transfections, but also for viral vector titre, offering a 2-fold improvement in AAV vector titres compared with PEIpro® (Figure 5), therefore making it the most advanced and powerful reagent currently available.

During manufacturing of AAV vectors for gene therapy, transfection really matters. Thus Polyplus-transfection, the delivery expert, has developed FectoVIR®-AAV, a novel transfection reagent that improves viral vector titres and process development addressing many of the challenges faced during large-scale manufacturing: 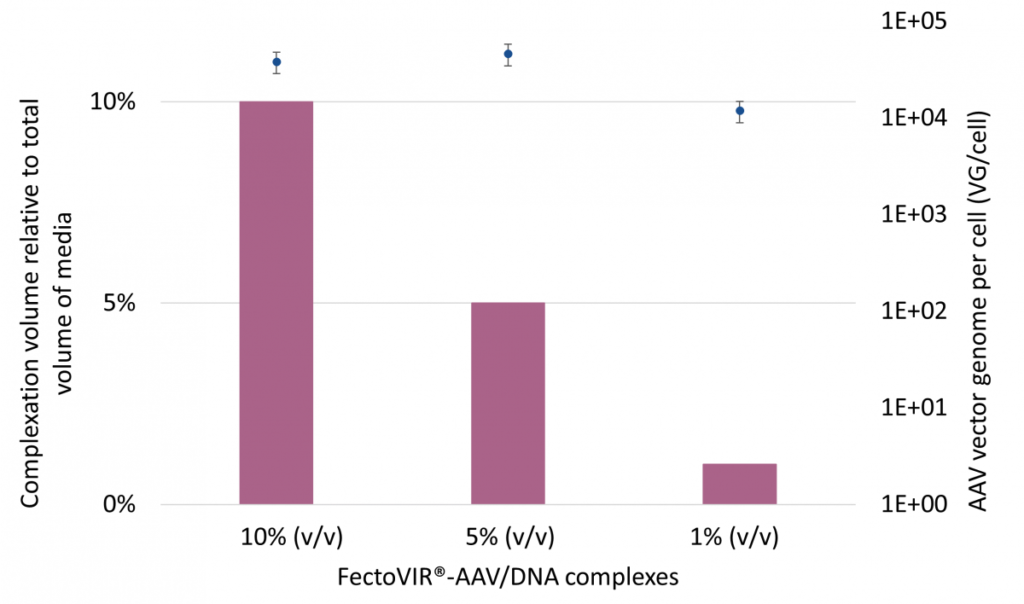 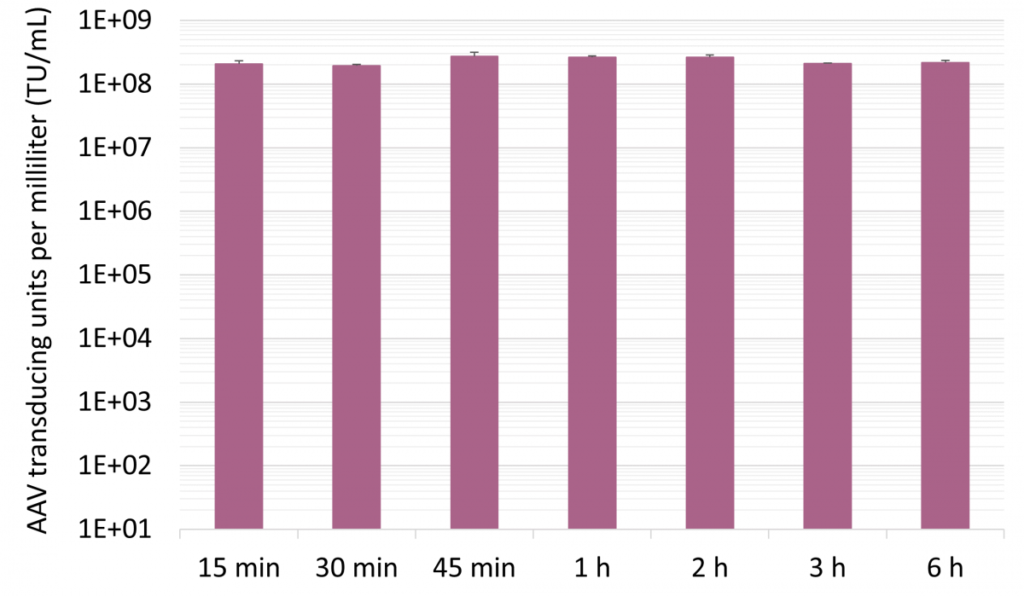 GFP-expressing recombinant AAV2 viral vectors were transfected into suspension HEK-293T cells using FectoVIR®-AAV and chemically defined media. The stability of FectoVIR®-AAV/DNA complexes was determined by incubating these complexes for an extended period of time (from 15 mins to 6 h) prior to transfection. GFP-expressing recombinant AAV2 viral vector titres (transducing units/ mL) were determined by transduction of adherent HEK-293T cells and measuring the number of GFP-positive cells 72h post-transduction. Viral vector titres are presented as average ± standard deviation of three experiments. Incubation of FectoVIR®-AAV /DNA complexes for up to 6h before transfection of suspension cells does not affect vector titre yields. 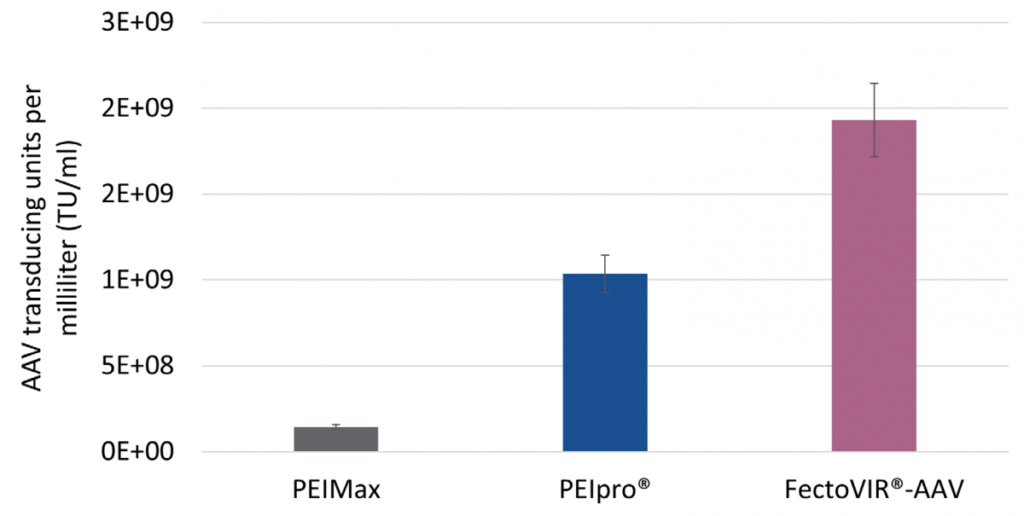