I consumed a staggering amount of information at last week’s Phacilitate Leaders Europe, but it was the final presentation at the end of a long sunny Tuesday in Lancaster Gate that was truly special.

If you’re connected with me or Phacilitate:Exchange in any way, you’ll probably know that gene editing is a current focus so, naturally, I was looking forward to hearing from Prof Farzin Farzaneh, Dr Gregory Berger and Dr Shirley O’Dea. It was Shirley’s presentation of Avectas’ proprietary method of transfecting cells that got the audience excited.

Shirley immediately looked towards the challenge of solid tumours. It’s undeniable that the likes of Kymriah and Yescarta have achieved great things but haematological malignancies are a small fraction of the overall tumour burden with the majority of malignancies being solid tumours. As we know, the solid tumour environment is much more challenging with physical and immunological barriers that are going to require highly sophisticated cell engineering techniques. It’s the part that these next-generation cell engineering techniques play in the manufacturing process and the impact on cell functionality that stand to be significant challenges.

Viruses have led the field so far but we’re now seeing limitations in the capacities of viruses to take on next-generation cell therapies. Viral transduction is expensive and time-consuming so it’s no wonder we’ve been searching for non-viral approaches, but current non-viral methods come at a cost in terms of cell viability, functionality, for instance, a proliferation stall is seen post electroporation event.

So, what new delivery approaches are emerging? Enter Avectas…

Soluporation® is the latest approach from the Irish company, an overview of its mechanism is shown in the image below but there are three facts you should know. 1) it’s a proprietary solution, as well as a device, 2) the solution is applied in droplets allowing for tight control of volume, time and pressure and 3) the entire process happens in less than five minutes. 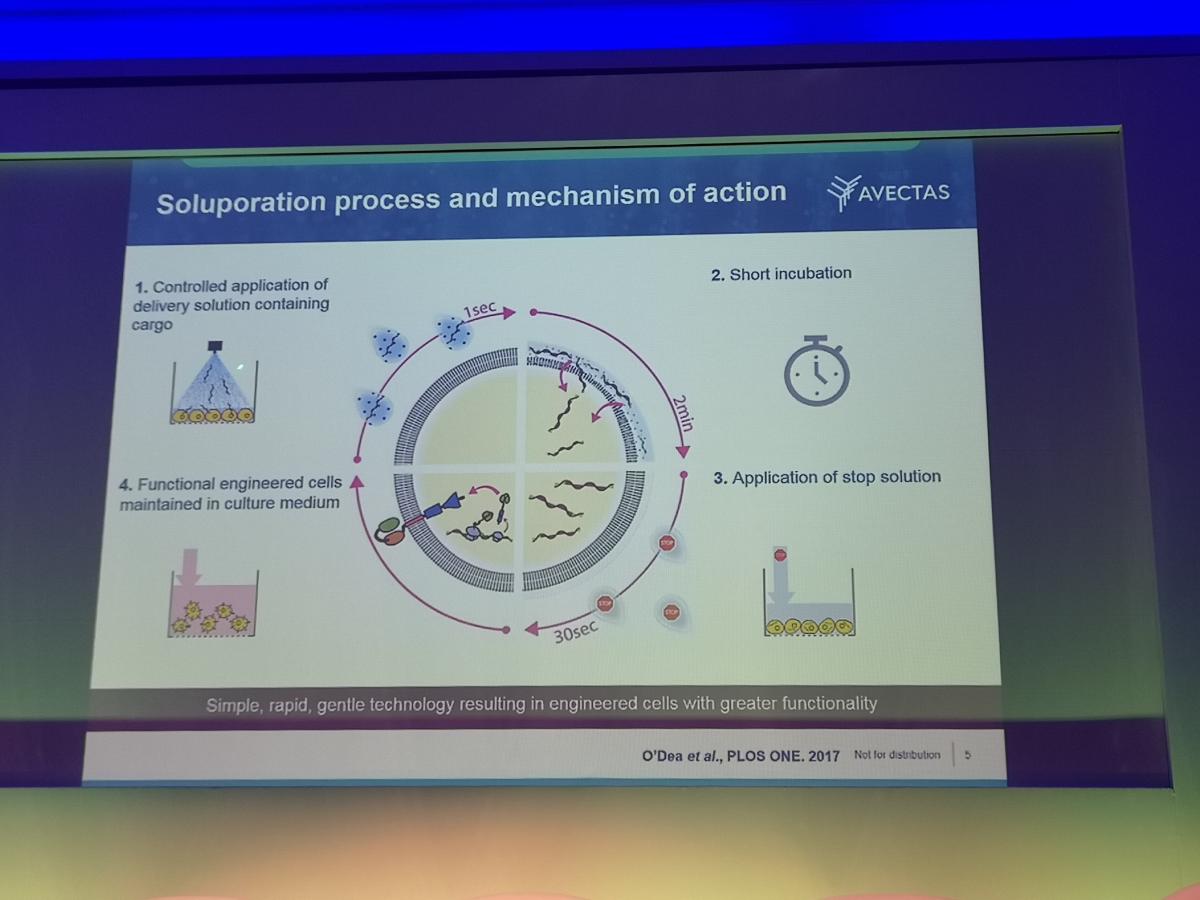 The name of the game, however, is scale-up, so how does this method fare in terms of scale? Well, a small-scale R&D system has been developed and a larger-scale clinical system is currently underway. So, the short answer is ‘tbc’ but Shirley did give some a range of 105 to > 108 as shown in more detail below. 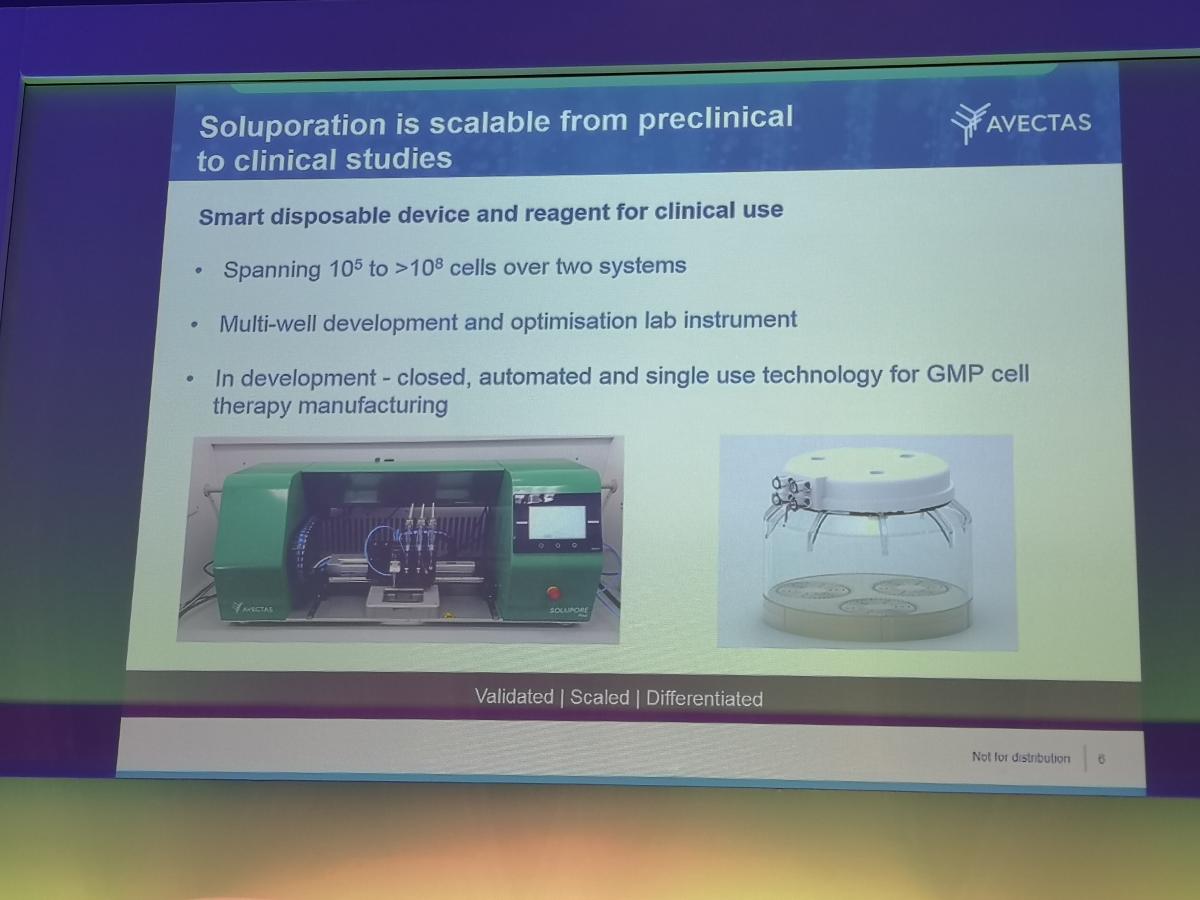 However, the biggest take away for me was the impact (or lack thereof) of soluporation on cell functionality. Here’s some of the data Shirley provided: 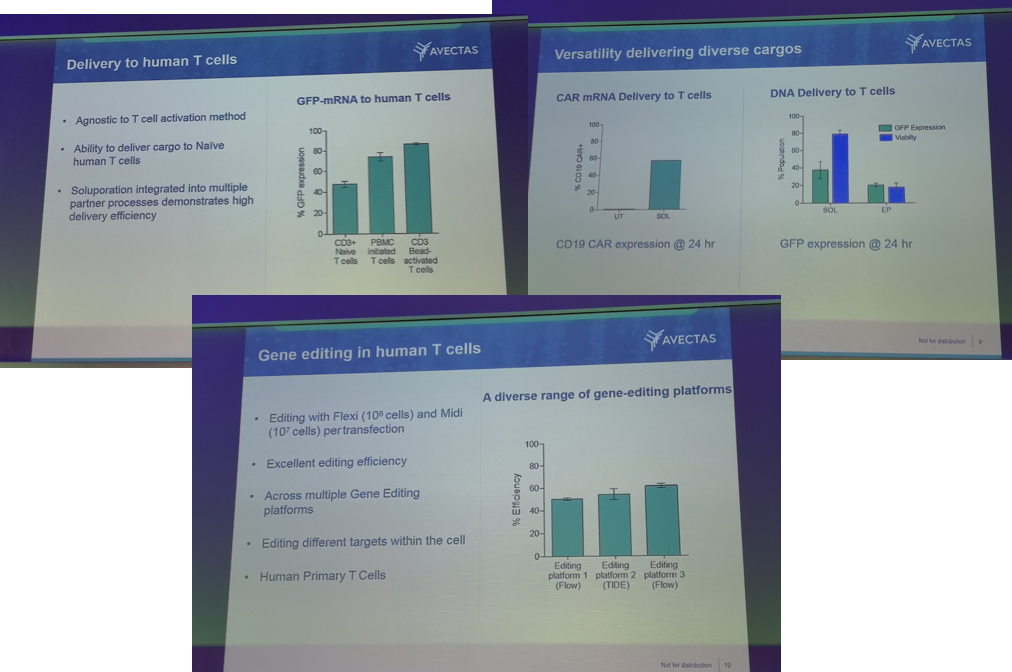 Gene expression analysis, proliferation of T cells and protein expression (cytokine release) and is shown below for soluporation and nucleofection, demonstrating the impact on the functionality of cells: 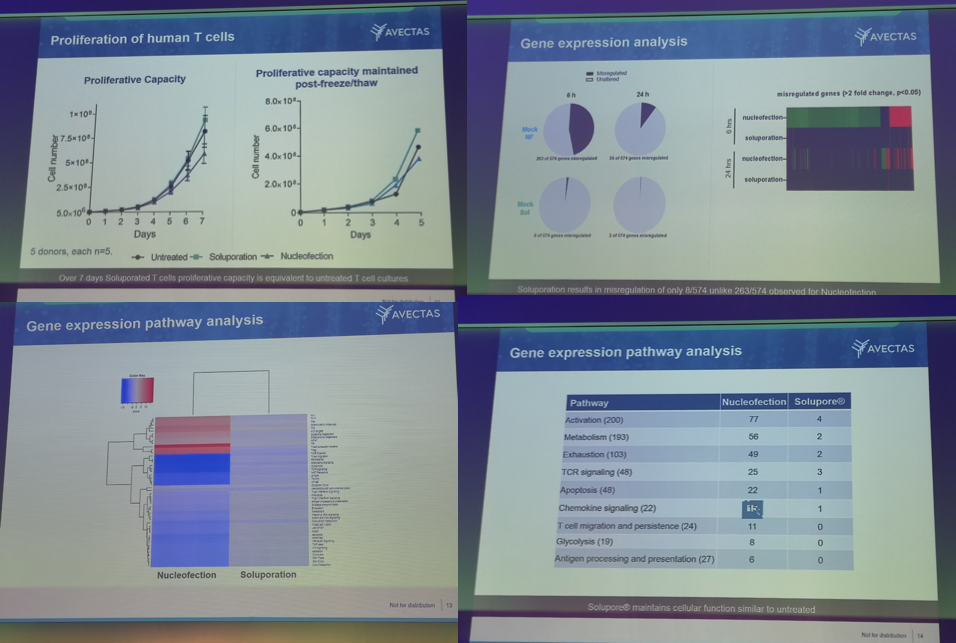 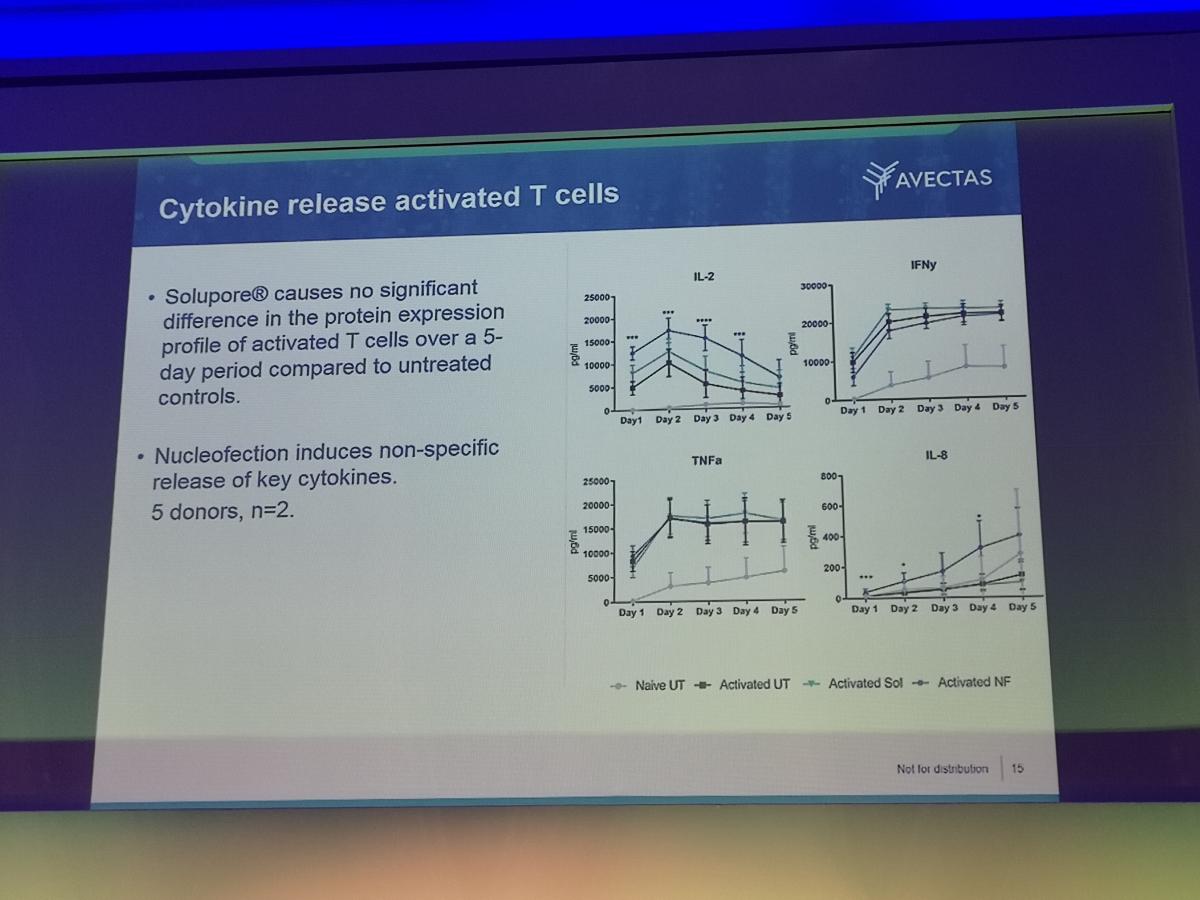 Finally, we saw some early in vivo data that also supported the high cell functionality after soluporation. 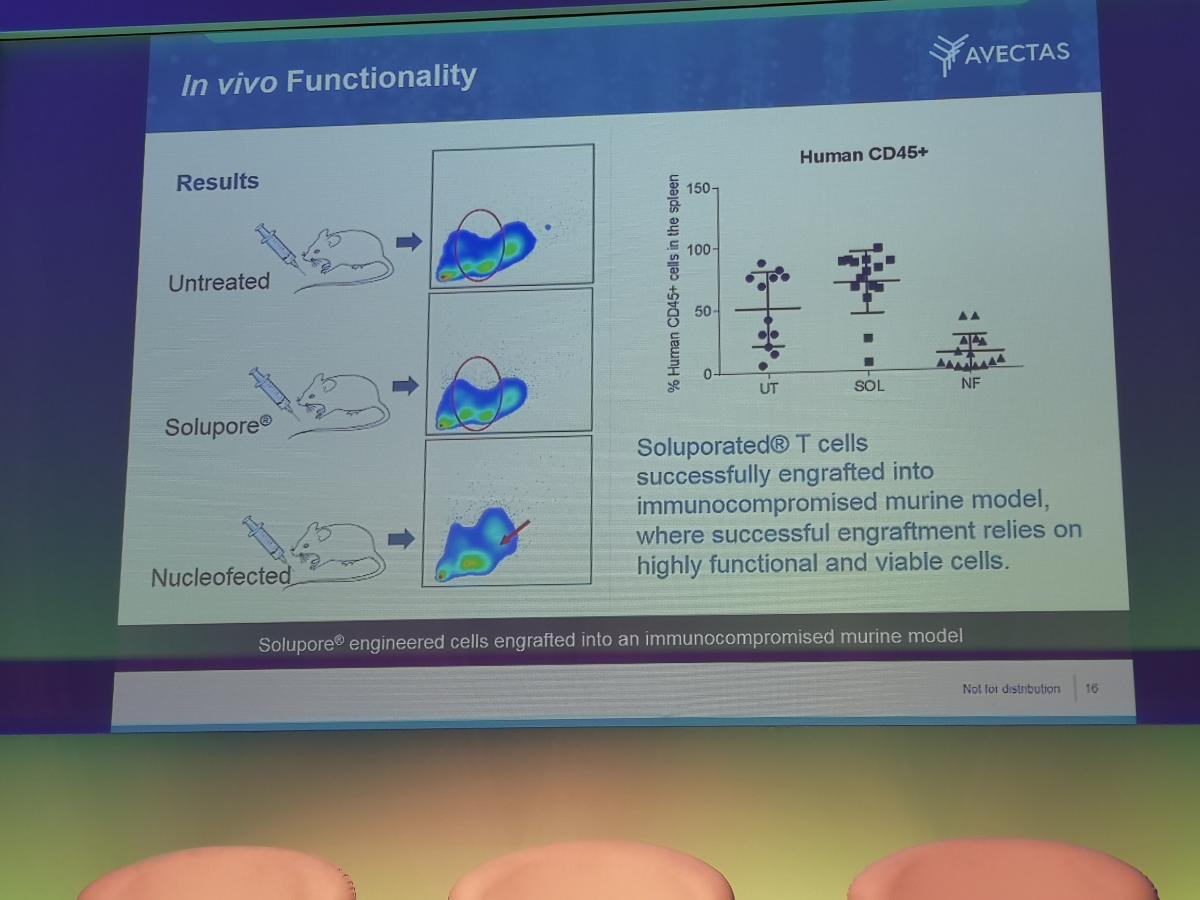 And there we have it, a brand new, highly promising and non-viral approach to cell engineering with predictions that we’ll see some early clinical trial data around this time next year.

For more information on other non-viral, and indeed viral, methods of gene editing, take a look at our latest technology review here.